Though reduced in diversity today, the siphonophores were one of the pioneering ancestral sky organisms. In contrast to the earlier kinds, forms today are mostly predatory, with tentacles trailing below to catch small creatures. Their bodies are composed of various polyps which serve different functions; particular to all aerial siphonophores is a large, gas-bladder polyp which keeps them aloft. The float-like polyps of marine siphonophores such as Man-o-war may be structurally related to the air bladders of the aerial forms.

This aerial ctenophore is rather typical in form, with a large gas bladder about 2 meters across, arm like structures to either side provide stability. When sighted it was dark in colour, but as with many critters, this species can alter the opacity of its body. Most often found in the mid stratosphere. 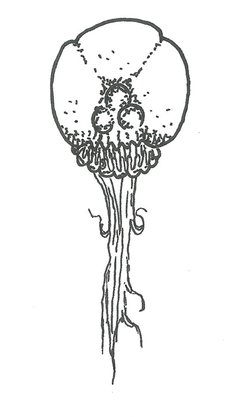 The gas bladder of this species is about 5 meters across, and is able to produce a bright glow. The darker lobes in the centre serve an unknown purpose, but may be the fleshy base of the light-producing organ. 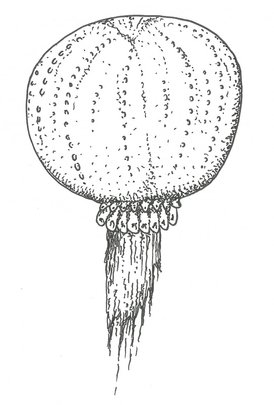 The only sighting of this creature was an individual stranded on the ground. Unusually, it is able to inflate its gas-bladder greatly when alarmed, presumably as a defence mechanism. At full inflation it is about 3 meters across. 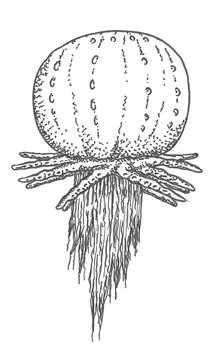 The individual sighted was stranded on the ground and apparently in distress, it possesses large muscular tentacles to each side, as well as those hanging below. It is apparently an aggressive predator; it was able to do injury when it was sighted. This species most probably inhabits the mid stratosphere.