The molluscs of the aerial fauna are mainly active predators, often resembling dynamic shapes such as chevrons, triangles or even stingrays. Varying in size from as small as a gull to as large as a mid-sized plane, they usually have propulsive organs such as fins, or in some cases bladders which can expel gas very swiftly, much like the jet propulsion of a squid. Unlike the sky jellies, which simply engulf their prey, aerial molluscs usually have muscular mouths and toothy tongues (radulas) which allow them to chew large portions of flesh at a time.

Aerial molluscs are usually found in the mid and upper stratosphere, where the density of other critters is high, this is because most of these predatory molluscs have a fairly high metabolism. Buoyant gases from their digestion are sequestered by their bodies and stored in tiny air pockets throughout their bodies, which allow them to remain aloft with little effort. 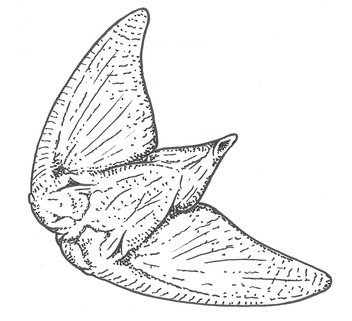 Measuring about 2.5 meters across, this winged mollusc is usually found in the mid-stratosphere, where it chases smaller airborne prey. The individual sighted was stranded at ground level. This species is able to alter the reflection and opacity of its body in order to conceal itself from predators or other threats, as it did in this instance. 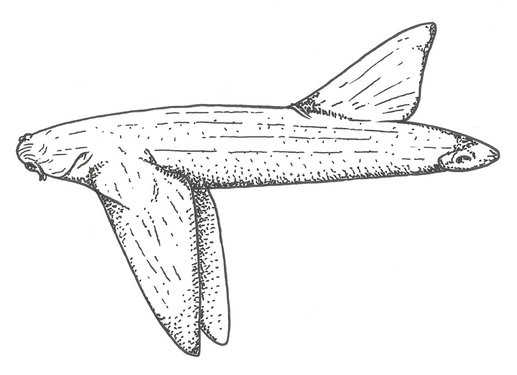 This torpedo-like creature reaches about 3.5 meters in length and can move with great speed, via a combination of flapping appendages, and expelling gas at high speed. Generally they prey upon the faster kinds of small critter in the mid and lower stratosphere.

The rippler is a slower moving predator, reaching about 7 meters long. Rippling muscular membranes line its sides allow it to move in any direction with relative ease. This species most often feeds by ripping chunks off large sky jellies in the stratosphere.

Shmoos are unusual critters that inhabit the upper trophosphere, but are able to survive at surface level relatively well. They have large gas bladders which allow them to move via jet propulsion. Opportunistic feeders, they will engulf anything smaller than themselves. Shmoos reach a maximum size of about 8 feet long. 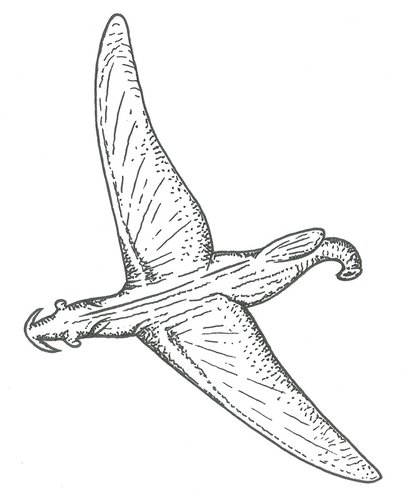 Source: Sighted in South Yorkshire, England, in the spring of 1992.

Redbirds are one of the largest and most formidable molluscian critters, reaching 20 meters in wingspan. Inhabiting the mid stratosphere, they pursue other large critters without mercy. When they stray into view near the surface, they are quite an alarming sight, often mistaken for alien spacecraft. 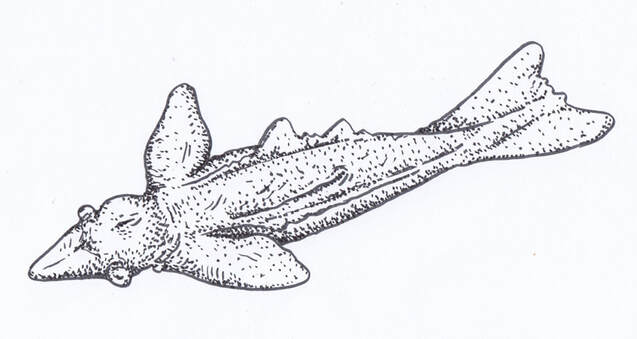 Source: Sighted in a churchyard in Highclere, Hampshire, England. First published in 1890.

This creature, said to resemble a dolphin, supposedly took residence in a yew tree in the yard of Highclare Church, where it would make a cacocophony of wheezing blowing sounds, and supposedly chase people. It seems this was a relatively elusive molluscan skybeast that is only sometimes able to tolerate living on the surface. Lacking air bladders, its flesh forms a king of aerogel, filled with tiny pockets of gas. As such, it may have become stranded on the surface and roosted in the yew tree because it could not regain altitude. 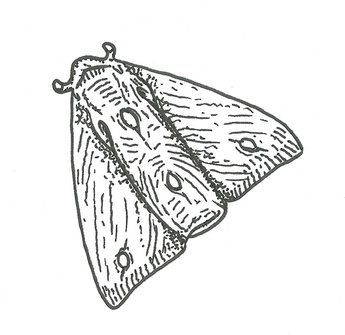 Large, fast-flying molluscs, the triangles move smoothly through the air via jet propulsion, pushing air out their rear siphon much like a squid. They possess an array of bright lights on their underside, with which they attract smaller prey. 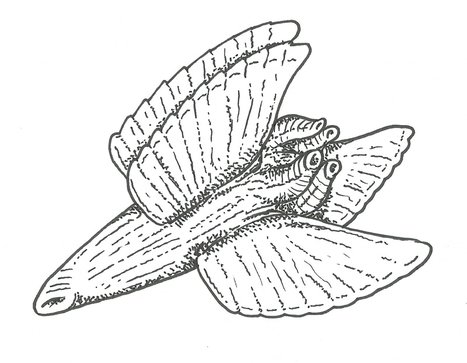 Cherubim have been greatly misconstrued by the writings within the bible. They have four large pale wings (reaching a wingspan of 6 meters), and four mouths that can evert themselves into clusters of tentacles. They move via a combination of flapping wings and jet propulsion, and can tackle relatively large prey. 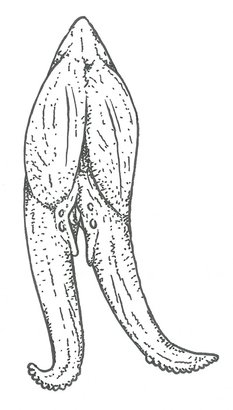 Source: Sighted in Colima, Mexico on January of 2015.

This particular critter almost resembles a large pair of legs, or a horse seen from the front. What resemble legs are actually large tentacles, up to 5 meters long, which can seize fair sized prey. Usually they suspend themselves motionless in the stratosphere, laying in wait for prey to blunder past below. When this happens, they will descend rapidly onto the prey and consume it.

Reaching 30 feet long, and covered in reflective plates, these critters are well-equipped for attacking and consuming sky jellies, their main prey. When sighted closer to the surface, they are usually mistaken for alien spacecraft. Their bodies contain a high amount of buoyant gases to counteract their relatively heavy armor. 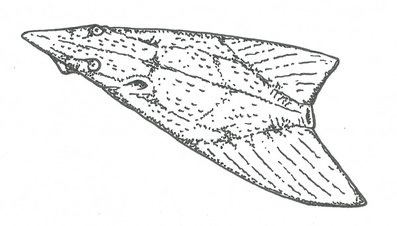 Source: Sighted in Bristol, England in 2004.

Resembling a flat black chevron 2.5 meters across, these dark-coloured critters fly via jet propulsion, and also by flapping the wings at the rear of the body. They most probably prey on smaller critters in the mid stratosphere. 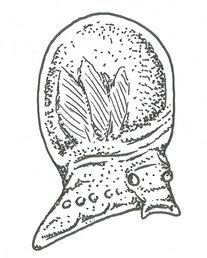 Brown baloon critters are fairly small, only as large as a child’s balloon, but have distinct eyes, mouths and gills. Evidently they stay aloft and propel themselves via a large pocket of gas on their backs. 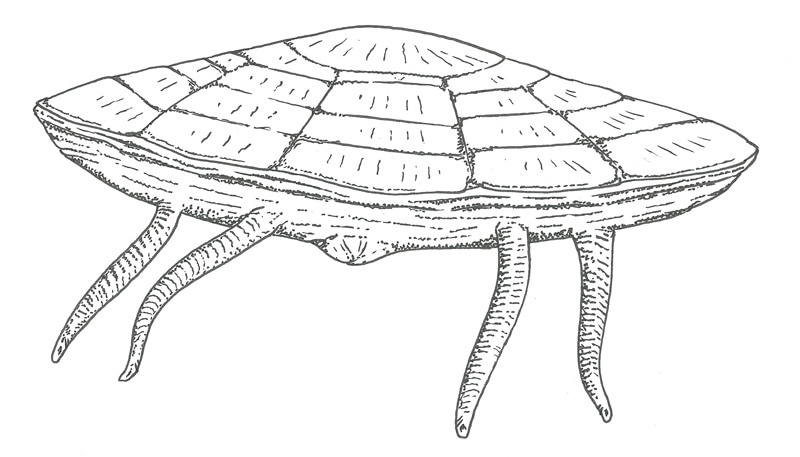 Source: Sighted in the Nevada desert USA, on a high mesa, by Don Wood Junior in 1925.

One of the most highly evolved aerial molluscs, the gargantuan glider almost resembles a sky-jelly in shape, reaching 9 meters across. Plated with large reflective scales, and having a large internal bladder of gas, it moves and feeds relatively slowly, as opposed to the more vigorous predation shown by most molluscian critters. Prey is seized with its sucker-tipped tentacles, and passed into the central mouth. Most often found in the upper stratosphere. 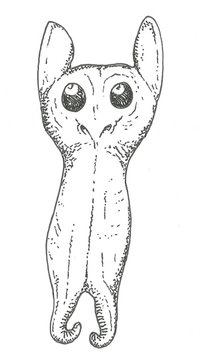 Small and octopus-like, this mollusc looks vaguely humanoid when in its defensive posture. Indeed it was mistaken for a haunted scarecrow. Thought to inhabit the mid stratosphere and to prey on critters small than it. 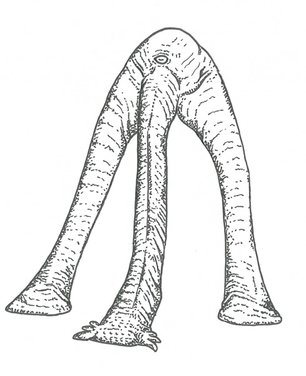 This species is unusual in being terrestrial; but we can suppose it is descended from some kind of aerial mollusc due to its strange anatomy. Populations of these critters are centred on parts of the United States, but they are becoming exceedingly rare. They have 2 large leg-like tentacles, and a mouth at the end of a long tube, which gives it the appearance of walking on three muscular legs. They usually feed on small ground-dwelling creatures such as insects, but are commonly attracted to sources of light. The single eye has very acute vision, and when alarmed it emits odd squeaking noises. 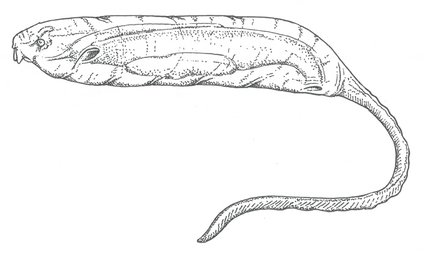 Source: Sighted in Prague by a young man.

This slow-moving aerial mollusc is buoyed up by a large balloon-like sac of gas, and propels itself with a whip-like tail. Being a relatively weak flier, it is sometimes blown off course and sighted at ground level.