​These creatures are typical sky-jellyfish. They are held aloft by large bladders which contain lighter-than-air gases, produced by specialized glands within their bodies. As with most critters, their flesh is also imbued with tiny pockets of air, which lighten the body considerably. Modern forms mainly drift about in the air, using their long trails of tentacles to trap smaller creatures. However the ancestral form, as with all air-jellies, must have been a photosynthesizer, which would explain why some forms still photosynthesize to a smaller degree, to augment their diet.
Sky Medusae –

Here are two relatively typical sky medusae. Common forms such as this vary from 5 to 30 meters across, and are relatively slow-moving. They feed mainly on small airborne critters, which they snag with their curtain-like tentacles. When spotted from the ground, sky medusae typically resemble large, mushroom shaped clouds suspended high in the sky. Usually their flesh is either light blue or white. Sky medusae typically inhabit the lower stratosphere and upper troposphere. 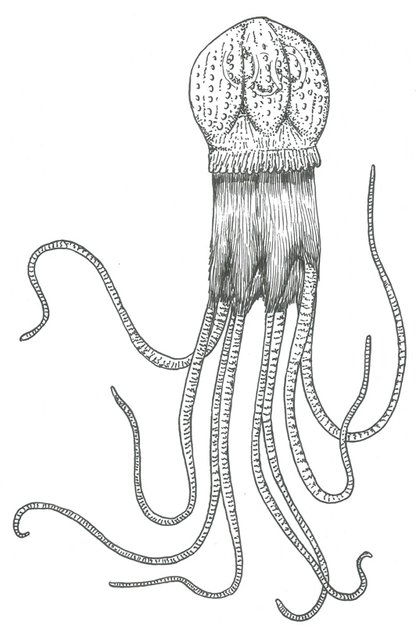 This is a larger and much more aggressive variety of sky-medusa, at about 100 meters full length. It is able to snare and subdue quite large flying prey with its 8 long, powerful tentacles. When irritated or surprised, it is able to glow a bright, vivid blue. 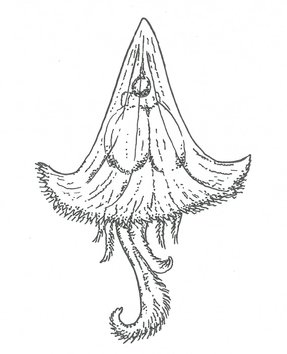 The Kasa-obake is mainly known from the myths of the Japanese, but these appear to be individuals which have become stranded on the ground or injured. Typically these sky jellies live in the very upper reaches of the troposphere, flapping their umbrella-like hoods to stay aloft. Myths often liken them to living umbrellas, which they do resemble in size and shape. 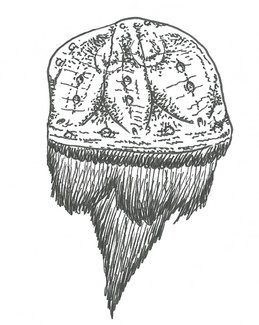 These basketball-sized jellies are typically found in the upper troposphere, but due to their relatively weak propulsion, they become stranded on the ground somewhat more often. 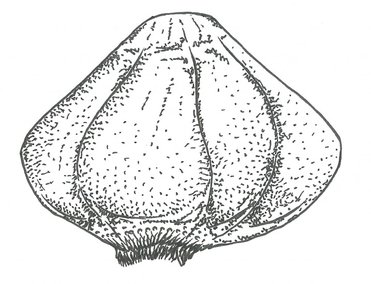 This relatively small jelly is black in colour and about 4 feet tall by 3 feet across. It appears bloated and leathery on the outside. The interior of this creature is filled with numerous gas bladders, which it is able to fill and empty in sequence, allowing it to glide along smoothly and silently. Though initially spotted on the ground, this form usually inhabits the mid stratosphere.