​Deinocaridans are most notable in the fossil record for forms such as Anomalocaris. But forms similar to this were initially able to colonise the sky after the Cambrain explosion. Most of these forms have large lateral fins which provide most of their propulsion, while their bodies and exoskseletons have large internal pockets of gas, lightening their structure.

Indeed, one form of aerial deinocaridan was so notable as to inspire the myth of the Dragon. Most deinocaridans of the air are large predators of the upper troposphere or mid stratosphere, but there are exceptions to this rule, such as the surface-dwelling “rods”.

Rods are small critters no longer than your finger. They are unusual in being one kind of aerial organism that has colonised the world at ground level. Usually rods move so quickly as to not be seen at all, but they are commonly captured in photos, much like the orbs are. They prey mainly on small insects, but will also consume orbs when they find them.

Though sighted near ground level, this 17 meter-long deinocaridan probably strayed there from its usual habitat, the mid stratosphere. With a large single eye, clawed appendages and large mouth, it is probably an ambush predator of other large critters. Its lateral fins generally resemble those of its distant Deinocaridan ancestors, and it undulates along at a fairly casual speed compared to other critters.

Rarely sighted in the modern day, the dragon is a large predatory deinocaridan, reaching about 10 meters long. Usually it inhabits the upper troposphere and lower stratosphere, but during historical times many seem to have strayed down to ground level. When sighted by people of the time, they were often viewed as a threat, and killed on sight, contributing the mythology of dragon slayers. 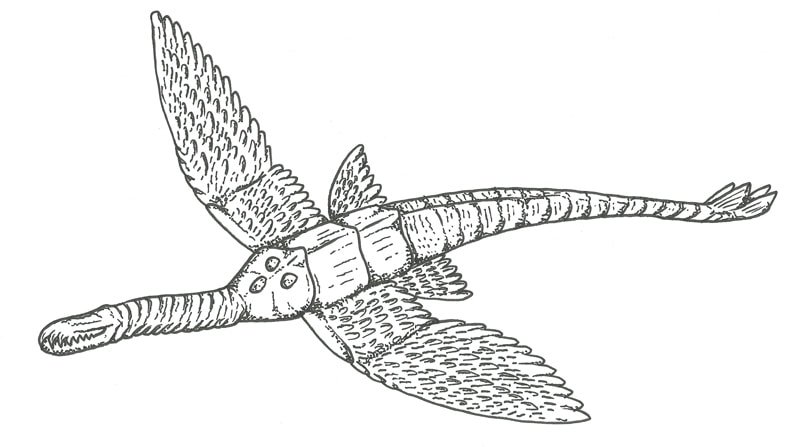 This critter reaches a wingspan of some 20 meters, and is most commonly found in the mid stratosphere, where it preys on critters smaller than itself. The few times it has been spotted from ground level, it has been compared to a dragon.

Reaching 4 feet long, this small critter has only been sighted once. It has been assumed that it is lamprey-like parasite of the mid stratosphere, nibbling off small portions of larger, passively floating critters such as sky-jellies.